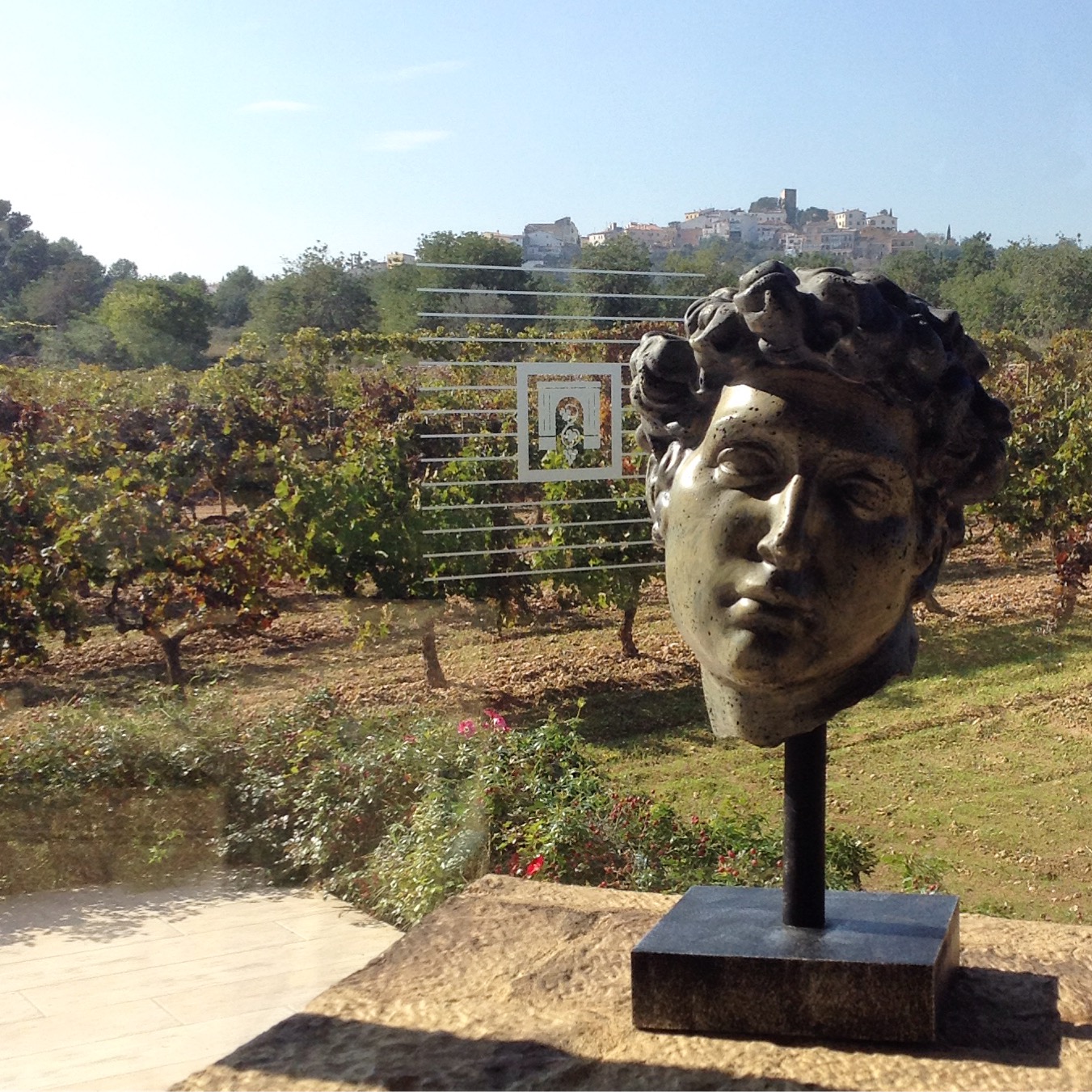 What connects Bob Dylan, the Queen of England and a long-dead Roman Emperor?

And no, I’m not talking about their dodgy hairstyles.

I’m talking about a small Catalan winery tucked away in a tranquil corner of Penedés which just happens to produce one of the world’s best vinegars. Born of Joan Roca’s dream to make his own wine, Cellers Avgvstvs Forvm began operations in the late 1980s. Joan took the name from the Vía Augusta, the mighty Roman road built to connect Iberia’s major cities directly with Rome. This ancient way runs across part of the property, and Joan decided to continue the theme by naming his plots of vines after Roman Emperors. First was the venerable Marcus Aurelius, followed by big hitters like Nero, Julius Caesar, and Tiberius.

So how am I going to sneak the Queen and the right royal Bob in to this story? Well, it turns out that Joan’s vinegar was a big hit in culinary circles, being served in Michelin-starred restaurants all over the world including the legendary El Bulli.

It wasn’t long before it caught the attention of the Palace. One day, recalls head of enotourism Marko Moritz, coachloads of people turned up at the winery. It was only later that the staff found out their vinegar had been served at Buckingham Palace. Vinegar fit for a Queen – what a marketing gift!

Joan hadn’t initially intended to focus on vinegar production, but this unexpected success proved a game changer. One year he received a letter in a strange language. Being unable to read it, he tucked it away, pleased that people all over the world were enjoying his vinegars. Then the same thing happened the next year. And the next.

After the third letter, he got his son to investigate. Turns out it was a note from the head chef of the Nobel Prize ceremony in Stockholm. For the past three years their vinegar had been selected for use in the banquet, an event which prides itself on using only the finest, Nobel prize-worthy ingredients. This beautiful relationship would go on to last fifteen years, during which thousands of the world’s brightest and best got to sample the wares of a humble Catalan winery.

Sadly for Bob, in recent years the banquet has shifted to using locally-sourced ingredients so he won’t get to sample the Roca family’s exquisite vinegar if he does actually attend this year’s ceremony. I guess he’ll just have to swing by the winery in person and trade a couple of tunes for a sup of their bittersweet beauties. Perhaps “Knockin’ on Heaven’s Door” would do the trick?

Joking aside, you might think that it’s pretty easy to make vinegar. You’ve probably done it yourself. It’s just what happens after a big party when you end up with enough opened bottles to feed a (Roman) army.

My gracious host Marko led me through the process to create these beauties. The only way to create a good vinegar is to start out with the best base materials, so they use top quality wine. The wine goes into a stainless steel tank where it’s repeatedly pumped and mixed with “aceto bakter” bacteria to ensure a controlled and rapid acidification of the whole tank.

After 6 months you’ve got your vinegar. This is where the fun starts. The winery uses three different grape varieties to craft a total of four vinegars. With the exception of the FORVM Merlot vinegar, the other three all spend some time in a solera-type ageing system. In similar fashion to the sherry-making process, small amounts of younger vinegars are blended with more mature vinegars to ensure an incredibly complex final product. The solera system for their most venerable vinegar, the FLAVIVS, contains vinegar which is 20 years old!

Even better than talking about the vinegars was tasting them. We started out with the youngest, the Merlot, and progressed through to the Chardonnay, Cabernet Sauvignon and the big daddy flavour sensation that is FLAVIVS.

Having never participated in a formal vinegar tasting before, I think this might be one of my new favourite pastimes. Marko served each out of a little dropper bottle, putting a dash of each one at a time onto the back of my hand. The idea is to lick up the drop, holding it in the front of your mouth and moving it around to appreciate the nuances of flavour. Swallow too quickly and the acidity hits you right in the back of the throat.

Marko suggested a fabulous way to use the vinegars is making a rich reduction to accompany goat’s cheese, meats or even as a replacement for soy sauce. Smacking my lips over two sample reductions, I began to see what he was on about. The flavours were remarkable; complex, honeyed and perfectly balanced by the acidity.

Today the FORVM vinegars are considered some of the best in the world, and they’re exported to over 30 countries. What started out as a small side project has blossomed into 230,000 bottles per year and a firm place in many of the world’s finest gastronomic institutions.

They do also make wine

As well as making Bob Dylan-worthy vinegars, the Roca family also does a drop of wine. Around 110,000 bottles of it, actually. Like the vinegar, the aim here is quality and standing out from the crowd.

Most people associate Penedés with Cava, and by extension with the traditional indigenous grapes that go into the fizz. Right from the beginning Joan knew he wanted to take things in a different direction. The first vineyards he planted were Cabernet Sauvignon and Chardonnay, making him only the second person to put Chardonnay into Spanish soil. The winery also claims the trophy for the country’s first oak fermented Chardonnay. Marko explains that their ethos is wines with a “French touch”, and they’ve just been certified as organic.

They also have a “Microvinification” line to try out making some fun stuff on a smaller scale. One of their recent sell-out hits from this line is the Malvasía de Sitges, a local variety which was brought to the region from Greece by a Catalan mercenary during the Middle Ages. Usually used to make sweet wines, this version is fermented in 500L French oak barrels giving it warm caramel and creamy notes to complement notes of tinned peaches from the grape. For a moment I’m transported to distant school holidays, eating peaches and cream out of a plastic bowl on some windy (and probably cold) English beach.

Isn’t it funny how wine can do that to you?

Other Avgvstvs highlights are their smouldering oaked Chardonnay which spends 4 and a half months in new French oak, a strawberry fields forever Rosé made with Cabernet Sauvignon and a dash of Merlot, and a rich winter warmer Cabernet Franc 2013 which is one of just 5 single varietals made in Spain. 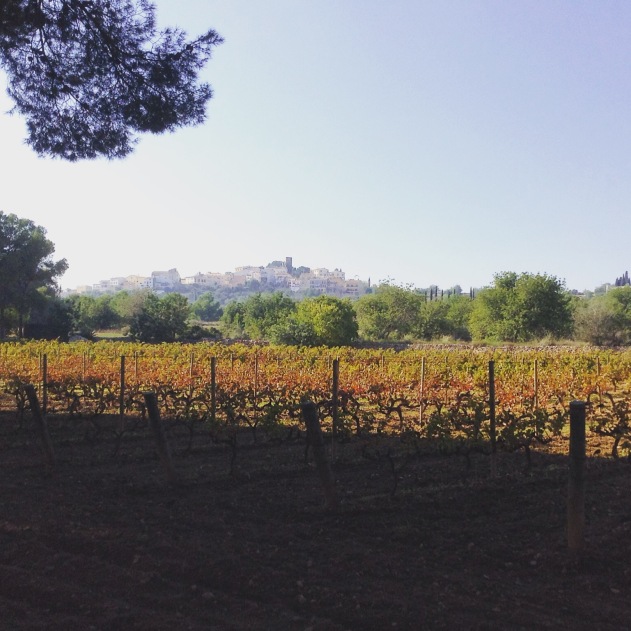 Many of these wines are exported all over the world, so chances are you’ll find a stockist close to home. Even better, though, is to come out here and see it for yourself. A lot of thought has gone into creating the perfect visitor experience, starting with the gorgeous shady tree-lined avenue leading you past the vines and ending with the vast modern tasting room with views up to the cute hilltop town of Sant Vincenç de Calders. It’s the perfect place to get acquainted with some of Catalunya’s finest gastronomic products.

I’d like to shout out a big thanks to Marko Moritz and the team at Cellers Avgvstvs Forvm for letting me nose around and taste my way through your wonderful wines! If you’ve enjoyed the read, why not join us here at The Wine Culturist by simply clicking the follow button at the bottom of the page… We always love making new winelover friends!